On newer Ubuntu versions you have to install python-appindicator manually or this script won't start.

After the change to Unity in Ubuntu 11.04 I used sshlist a lot. It's a nice replacement for sshmenu, implemented as Appindicator. Unfortunately sshlist supports only ssh in the Gnome Terminal (as supposed I guess), but I also need rdesktop and PuTTY for some work. So I thought, it would be nice to extend the original script to use this programs too. I modified sshlist, called it simplestarter and release it now under GPL3. Anil, author of sshlist, gave me his agreement to do so; thanks for that.

The steps to use it are simple:

The result is a nice menu like this one: 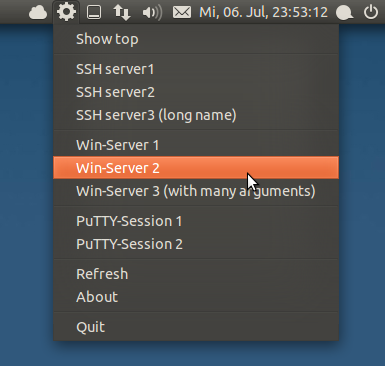 The syntax of the config file is really simple:

ARGS can be empty. To insert a separator, add a line which only contains "sep". Empty lines or lines starting with "#" will be ignored. The example file for the menu in the screenshot is this one:

I've added a simple feature called "Labels". This are non-clickable menu items. You can use them to categorize your entries. The usage is as simple as label:This is a label!. This will add a label with the caption "This is a label!".